View cart “Bosch PLE-1ME240 Plena Mixer Amplifier” has been added to your cart. 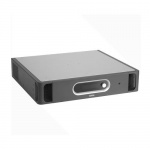 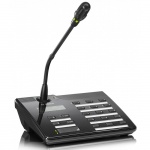 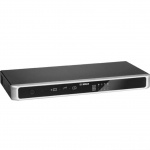 Bosch CCSD-CU Conference System Control unit
0 out of 5
( There are no reviews yet. )

The network control unit is the heart of the Praesideo system. The unit routes up to 28 simultaneous audio channels, delivers power to the system, reports faults, and controls the system. Audio inputs can be announcements from call stations, background music, or local audio. The network control unit can be configured for the most complex public address systems. The configuration can be done comfortably and efficiently via a PC. The PC is only needed for configuration. The controller can operate independently of the PC. However, the controller can use a PC to display information on the system status using the software, supplied with the unit. The unit can be freestanding on a tabletop or mounted in a 19″ rack.

The network controller has four analog audio inputs. Of these, two are selectable between microphone and line. The other two inputs are fixed as line inputs. The microphone/line inputs can be used as call inputs, if they are programmed conditionally to any of the eight control inputs, which are freely programmable for system actions, with freely programmable priorities. The line inputs provide selectable 20 kHz pilot tone detection for cable supervision.

The controller has four analog audio line outputs each with a selectable 20 kHz monitoring signal. Three control outputs are programmable for faults or calls, and two others are used to connect visual and audible fault indicators.

A 24 Vdc auxiliary output is available that can be used to power an external visual fault and/or emergency light tower.

The network controller is completely configurable from a PC using the supplied software, which can also provide the current status of the running system, as well as comfortable and efficient configuration. The controller can also run without a connected PC, once it has been configured. The front panel has a 2 x 16‑character LCD display and a rotary control to navigate through the menu and select the menu items. Address, version, fault events, and monitor enquiries can be done using the display and control knob. The network controller can control up to 60 nodes. Nodes include equipment such as power amplifiers, audio expander units, call stations, call station kits, etc. To meet the requirements for emergency sound systems, automatic messaging is included in the network controller. The controller has a built-in, replaceable compact flash memory card, to match the storage requirements for audio messages. Four messages can be played simultaneously. Message storage and the messages themselves are monitored. Audio messages (as a set of wav files) can be downloaded from a computer via the Ethernet link. The controller also stores a wide range of attention tones, test tones, and alarm tones, all accessible by any call stations or control inputs for announcement or alarm broadcast. The network controller has a built-in buzzer for notification of faults or emergency situations. An internal real time clock allows for event scheduling, such as playing scheduled announcements or changing the volume of background music during evening hours. It has extensive audio processing possibilities for the audio inputs and the audio outputs. Parametric equalization, limiter and gain can be easily adjusted using the configuration software. There is a headset jack for monitoring the audio channels.

The network controller supports redundant network cabling. It can be wired as a branched network or redundant loop. The system can handle 256 priorities, for calls to hundreds of zones, satisfying even the most complex public address and emergency requirements.

The controller monitors the status of all the equipment in the system, reports status changes, and stores the last 200 fault messages in the system. This monitoring extends from the capsule of a call station microphone to the end of a loudspeaker line. The external cables connected to the control inputs are monitored for short and open circuit. An internally generated pilot tone is available for monitoring the audio outputs. The controller operates both on mains power and on a 48 Vdc battery power supply for emergency back up, with automatic switchover. It can supervise both of the power supplies.